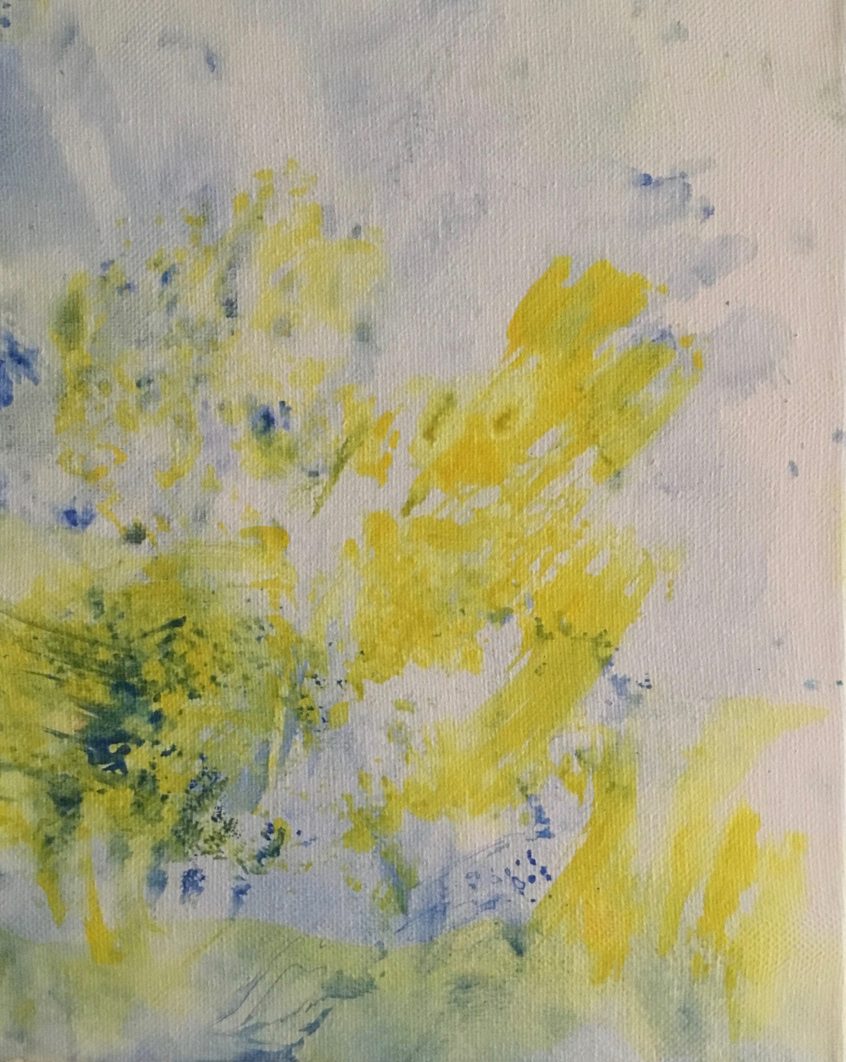 Kelly DeSousa is the art therapist and teacher who began working with Joshua about 5 years ago on exploring and creating art.  Below Kelly has shared her thoughts and memories of working with Josh:

Joshua Turnage has impacted my life and my career in many ways. When I first met Joshua, I was working at the Museum of Contemporary Art, Jacksonville, as an art therapist in the education department. I was asked to join a school tour to help our team of educators come up with a way to adapt for a student who was not able to participate in the hands-on art activity due to his functional limitations.

I will never forget meeting Joshua. I briefly learned how to adapt appropriately for him by speaking to his nurse and trying a few adaptive tools and techniques. He wound up doing printmaking with a large rubber stamp. Although he was nonverbal, it was apparent Joshua was excited to be out and about in the community and participating in art making. His facial expression and gestures said it all! It was a joy to meet him and I was excited for the opportunity to work with him.

When helping individuals with disabilities make art, the emphasis is always on providing the least amount of support needed so that the art piece can be created as independently as possible. I later learned that, in Joshua’s case, he was often sent home with artwork from well-meaning aides that would overuse the hand-over-hand technique with him. If done correctly, this technique can help individuals learn how to grip a brush or marker and how to make a mark on paper. This is the most intrusive kind of physical support, and the goal should always be to fade-out or minimize this kind of support to maximize independence.

The result of overdependence on hand-over-hand support for artists with disabilities is art products that are essentially made by the aide, rather than the artist themselves. The artist risks losing their creative voice with too much hand-over-hand. Joshua’s mom, Kendra, knew what her son’s mark making look like and could always tell when artwork was not his own.

One day I received a call at the museum from Kendra asking if it would be possible for me to work with Joshua to help him develop his art skills. I was told that they were working on art as his vocation as part of his Individualized Education Plan at school. This was the first I had ever heard of a student with disabilities having art approved by the public school system as an adaptive vocation. Art is not considered a “viable career”, according to the typical programs. But Joshua is anything but typical. An exception had been made and it was deemed that art could serve as his vocational career. The challenge was finding the right support.

At the time, I also worked in private practice as an art therapist. In this role, I was able to help individuals with special needs on a one-on-one basis with therapeutic goals, mostly focusing on art processes that help with self-regulation, self-expression, sensory integration, etc. But this was the first time I was asked to also help someone with a disability to create an art product that could potentially serve as an object to sell. We decided to create an art process that was therapeutic in nature but also had a beautiful product as an outcome. This way, Joshua’s career would be beneficial in many ways. He wouldn’t just be making art to sell; the process would also serve an enjoyable recreation and leisure activity, offer sensory experiences, social interaction, and an alternative means of self-expression.

I connected with Joshua’s multidisciplinary team to learn more about his abilities, interests, strengths, and adaptive needs. I learned he had created art with stamps, sand, rollers, and other adaptive tools, that he could grip objects well with one hand, that he did not like overwhelming sounds, that he would push things away when he wanted a break, but importantly, I learned that he LOVED music! Music was frequently used as his reinforcer, or reward, for completing a task. I wondered if we could make the art making process itself reinforcing, and so we started with what he loved the most, pairing paint with music.

We got to know one another, did a sensory exploration warm-up at the beginning of every session, discovering new textures, tools, scents, and sounds. I took notes on what he liked and didn’t like. The whole purpose in the beginning was to create a pleasurable experience so that art would become fun, rather than a task to be completed. Eventually, because we had gained a trusting relationship, worked together as a team, and persevered, we found the right combination of tools and techniques that worked!

We learned that Joshua enjoyed the texture of a wet sea sponge. He liked to grab the sponge and swing his arm to the rhythm of the music! And so, I started to simply capture the gesture of his movements with a canvas or paper taped to an art tray. The results were beautiful! Joshua received praise and applause from his peers and caregivers. Friends gave their feedback on what his artwork looked like to them. He laughed and smiled when he painted. We eventually made a short video to send home to Joshua’s mom so that she could see what her son was doing. Kendra knew this was not hand-over-hand; she knew that it was her son’s unique marks, captured on paper.

Joshua has been painting in many ways for several years since then. The goal of his team is always to maximize his independence and to streamline his process so that every choice and mark is his own.

Joshua has still had to face adversity from those who don’t believe he is capable of being an artist. He has had to prove himself time and time again. Many people are skeptical when they hear about Joshua’s art and his disabilities. They assume his creations were made using heavy hand-over-hand, or that many of the marks are not his own. His team has worked hard to fight against this adversity and stigma. Because Joshua is nonverbal, others must advocate on his behalf. Video footage has been created and shared broadly to show what Joshua can create. Awareness and education is an ongoing process.

Specialized tools and technologies are needed for Joshua to create with the least amount of support needed. Some have asked me how I can be sure Joshua even wants to be an artist. My response is always the same. I know he is an artist because he creates art. No one is forcing his hand. He enjoys painting. The most harmful thing to do would be to assume he is not. Creating art is a basic human impulse. Art creates connection, art is an outlet for emotions, and for Joshua, art is his voice. We should always presume competence.

A voice is sometimes seen rather than heard… Joshua is changing perceptions with his work, changing our ideas about what self-expression can look like. He is paving the way for others to be seen and heard.

Joshua’s voice holds great beauty and it’s a privilege to have been a small part in helping his inherent creativity grow into a career in visual art. 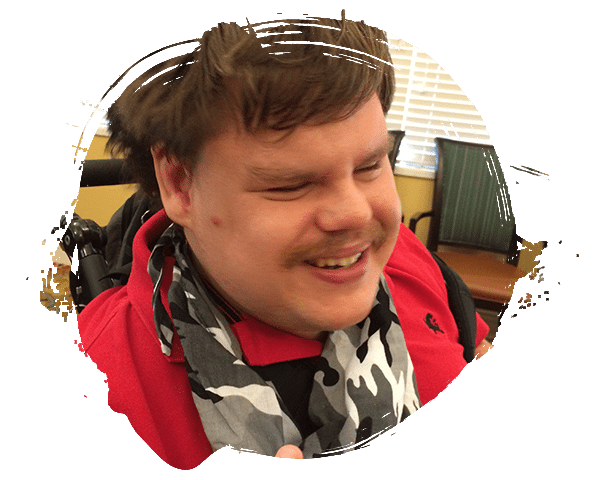